January 5, 2022
Categories
Find in This Article
Posted by Darko Radić 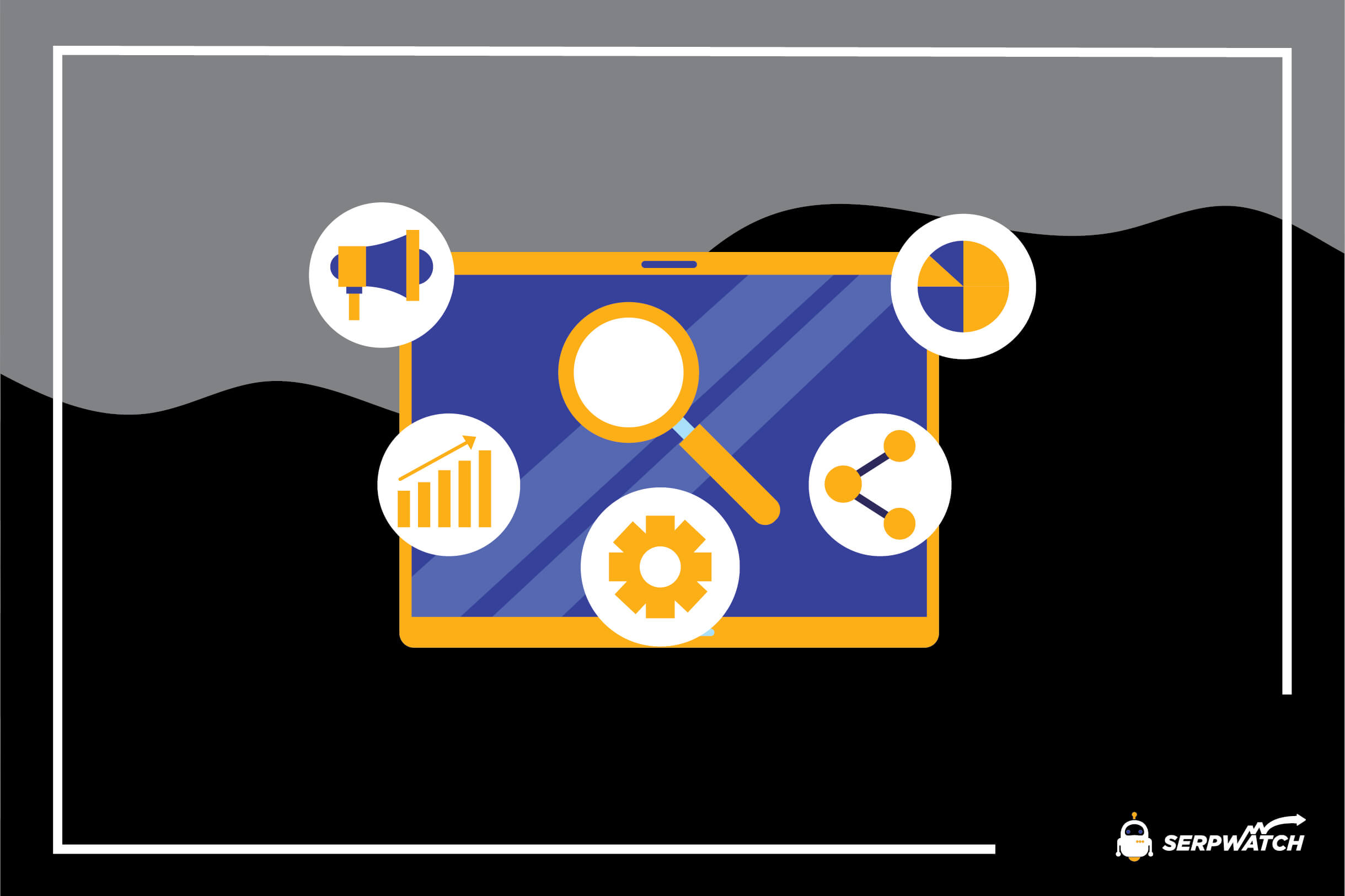 Filtering the enormous wealth of online information isn’t easy, but search engines do their job at lightning speed. No matter if we use traditional search engines or metasearch engines, they display relevant results.

From the SEO perspective, knowing more about search engines is crucial if you want to rank high in SERPs. Of course, tools like SerpWatch can help, but statistics and numbers can also provide lots of insights. So, let’s dive deeper into the world of search engines.

1. Globally, search traffic accounts for 29% of the web traffic.

Search engines play a massive role in the way the modern internet works. After all, they organize the wealth of information and consolidate the increasing volumes of data. Then, they provide us with answers to queries at lightning speed.

Google is the most influential search engine, pushing the market forward with continuous innovation and improvements.

But, of course, other search engines are also available, and they share the spoils with Google. For instance, in June 2021, Bing had 6.79% of the global desktop search engine market share, while Yahoo accounted for 2.75%. 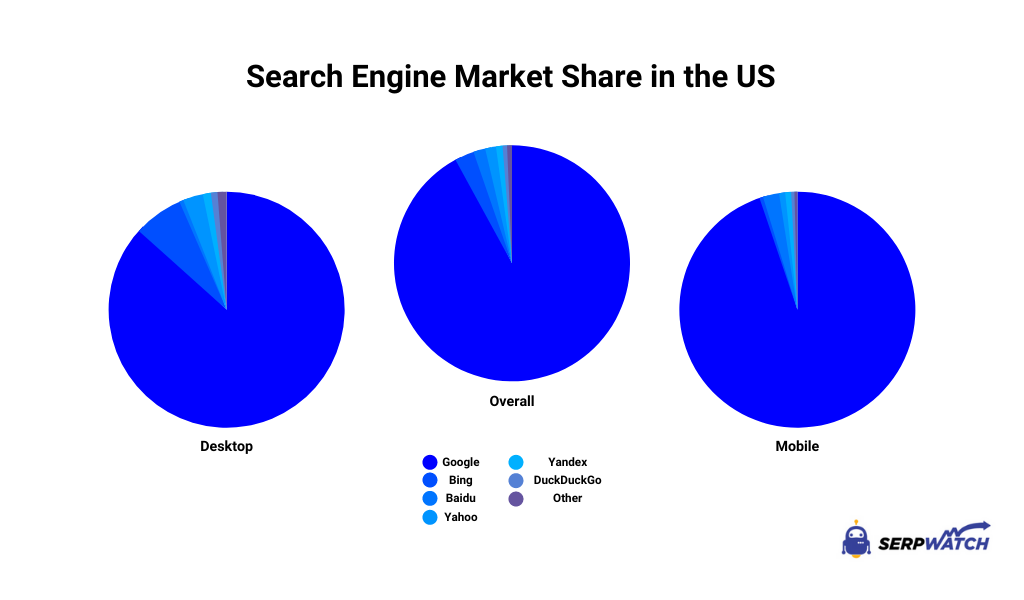 The world’s leading search engine runs a massive network from its headquarters in Mountain View, California, and provides services to billions of users worldwide.

Owned by its parent company Alphabet Inc., Google started its story in 1998 in student dorms and garages in California.

4. Bing holds a 6.79% share of the desktop search engine market. 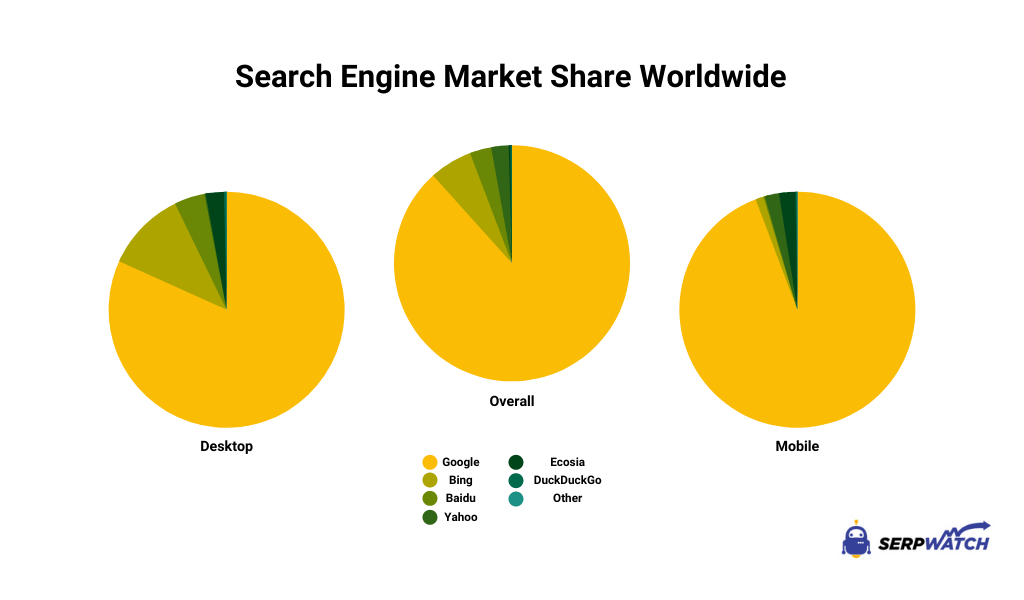 As expected, Google is the most popular search engine in the United States. On the other hand, Bing accounts for only 5.87% of the overall search engine traffic in the US. Yahoo holds third place with 2.96%, followed by DuckDuckGo with 2.38%.

In the ever-expanding online world, search engines are the places where everyone comes for information. As a result, these companies earn staggering amounts, and their revenues continue to grow. Let’s see what the numbers say.

Thanks to the enormous number of Google users, the company earned more than $180 billion in the most recent fiscal year. Most of Google’s revenue comes from advertising, which amounted to $146.9 billion last year.

By investing in new technologies and improving user experience, Google maintains its market leader position. For instance, Google’s revenue in Q1 of 2021 exceeded $60 billion. In comparison, the income in the same quarter of 2020 was around $38 billion.

As a result, Google stock trends also show massive growth, with Alphabet’s stocks rising by 66% since the start of 2021.

9. So far, Google has paid $8.2 billion in antitrust fines issued by the European Commission.

The record-breaking fine was imposed in July 2018, when Google had to pay $4.3 billion due to anti-competitive practices.

Despite the controversies and the fines issued by the European Commission, Google‘s reputation in the UK remained high.

11. 78% of European mobile internet users are “satisfied” or “very satisfied” with the available search engines.

Nowadays, the biggest internet search engines are standard on smartphones and tablets. Regardless of the operating system, most devices offer browsing on the go with the best online search engines.

Most importantly, more than two-thirds of users report satisfaction with the current offering on mobile devices.

Same as in the UK, Google dominates the mobile market in the United States. Interestingly, DuckDuckGo takes second place with 2.24%, while the Yahoo market share is only 1.98%.

In mid-2019, search engine statistics showed that DuckDuckGo’s worldwide market share was 1.25%, growing to 2.44% in February 2021. In general, the global privacy concerns in recent years boosted the popularity of search engines focused on security and confidentiality.

Even though the company doesn’t share search volume data, estimates show that the number of Google searches per day is around 5.6 billion, with the average person making 3–4 searches daily.

Amazingly, Google’s advanced algorithms can process around 63,000 queries per second, resulting in more than 2 trillion global queries per year.

15. 15% of daily searches on Google haven’t been seen earlier.

Continuous improvements are the secret to maintaining Google at the top in the search engine market. For more than 20 years, Google has kept enhancing user experience and rolling out core updates.

Even so, many queries are new. That’s why Google expands its data repositories and indexes new pages to provide accurate answers.

Knowing how to harness the power of search engine optimization is a valuable skill, and it all starts with search queries. For that reason, marketers and SEO professionals should pay attention to the following statistics and insights related to search engine marketing.

17. 93% of consumers in the US use local search to find businesses.

In essence, search engines connect users with websites that provide the necessary products and services. For instance, nine out of ten US consumers use search engines to look for local suppliers online.

Moreover, 34% of consumers use local search daily, while 73% search at least once a week. Of course, Google is the most used search engine.

18. On desktop devices, 62.2% of queries on Google result in an organic click.

Organic clicks are the primary goal of SEO campaigns, and marketers implement various techniques and practices to rank their websites and attract visitors.

On mobile devices, 40.9% of searches on Google result in a click on organic links. For both mobile and desktop, around 2% of clicks go to paid ads.

When looking at Bing’s market share by country, it’s clear that this search engine has the biggest user base in the United States. Approximately one in ten users prefer searching the web via Bing on desktop devices.

Likewise, 4.19% of desktop users search via Yahoo, while 2.48% of Americans use DuckDuckGo on desktop computers. Interestingly, Ecosia holds 0.17%, and StartPage holds 0.08% of desktop market share in the United States.

When it comes to search engine usage, SEO statistics show that Google is the leading search engine because it uses a complex system for evaluating and ranking websites.

Nonetheless, every algorithm update affects the rankings, and that’s why a reliable rank tracker like SerpWatch is a must.

Zero-click searches can negatively affect a company’s business goals because users don’t click the link to the website. So, monitoring the Google, Bing, and Yahoo ranking reports is essential.

Of course, savvy SEO professionals also benefit from the wealth of information provided in SerpWatch reports.

On mobile, more than half of searches end without clicks on organic or paid results. More precisely, 39.69% of clicks are organic, while the remaining 4.22% go to clicks on paid results.

So, since the behavior of Google search demographics is unpredictable, integrating Google Analytics into your SerpWatch dashboard can improve ranking and reduce zero-click sessions.

23. 87% of mobile device owners use a search engine at least once a day.

The worldwide adoption of smartphones and tablets has allowed internet users to search for information online effortlessly. For example, statistics show that 89% of users search for local businesses on their mobile devices once a week or more.

On top of that, 50% of consumers visited a store on the same day they performed a search.

Despite Google’s dominance, the global search engine market is exciting because it offers several high-quality alternatives. Thus, marketers and SEO experts must optimize content for various devices and search engines.

Understanding how Google, Yahoo, Bing, Baidu, or Yandex rank the results is the first step toward progress. In addition, integrating SerpWatch with Google Analytics will help you receive timely and accurate reports. More precisely, you’ll learn about the traffic and the browsing habits of your potential customers.

How many search engines are there?

Nowadays, Google dominates the search engine market, but this was not always the case. In the early days of the World Wide Web, many search engines battled for their place in the sun. Even though most disappeared, many survived to this day, despite being in Google’s shadow.

For instance, there are at least 17 excellent alternatives to Google. Depending on how we define search engines, the overall number of these tools is around 50. In any case, users have a wide range of alternatives at their disposal.

What is the most used search engine?

It’s no secret that Google rules the modern search engine market, if not the entire tech industry. This corporation’s effect on the IT market is immense, but Google also affects our daily lives, worldviews, and shopping habits.

Undoubtedly, Google is the most commonly used search engine, with more than 70% of the market share. Moreover, Google accounts for 85% of traffic on mobile devices. The alternative search engines, such as Bing, Yahoo, DuckDuckGo, and Baidu, share the spoils, too.

What is the most searched thing on Bing?

Owned and operated by Microsoft, Bing is arguably the most popular alternative to Google. Globally, Bing has around 5% of the market share, with millions of monthly searches.

Ironically, the most-searched term on Bing is the name of its nemesis, Google. More precisely, Bing’s global user base performs around 41 million queries for the word “Google.” In the US, most Bing’s users search for “Facebook” and “YouTube,” followed by “Google” with 8,060,698 monthly queries.

What is the best search engine?

Over the years, Google has developed a massive infrastructure, together with sophisticated algorithms for ranking. On top of that, Google continuously upgrades its services and adds new functionalities to improve user experience.

What was the first search engine?

Developed as a school project at McGill University in Montreal, Archie appeared in 1990, becoming the first online search engine. Alan Emtage created Archie for browsing through files on computer networks. Similarly, in 1991, Mark McCahill in Minnesota developed Gopher, a program that browsed through files and searched for references.

What percentage of search traffic is Google?

Google takes the lion’s share of the search engine market. In June 2021, for example, Google had 87.76% of the global market. Moreover, data from Statcounter shows that Google has 92.04% of the worldwide market share.

Regardless of the device, Google generates the most traffic, leaving all other search engines behind. In comparison, the latest search engine statistics show that Bing has only a 2.66% share of the global search engine market.

There are currently no comments.